Having unfortunately been unable to make Japanese post-rock quartet Mono’s concert last week in Vienna, it was a very pleasant surprise to arrive in Sarajevo for a two-week visit and discover, quite by chance, that they were playing in the city on only my second night there. Naturally, then, I wasted no time in going along.

The venue, the Kaktus, was part of a concrete eyesore, the Skenderija, which had for some reason been plonked slap bang in the centre of the city close to the banks of the Miljacka. Taking the form of a long, thin bar with a low stage at one end, the Kaktus was slow to fill up on this Monday evening but eventually swelled pretty much to capacity. There was a palpable sense of occasion among the audience; I can’t imagine that many touring groups make it down to Sarajevo, and certainly not too many Japanese outfits. I congratulated myself on getting there early doors and securing a vantage point at the front, since the low-slung nature of the stage meant that those further back would have been able to see precious little. Such considerations assumed particular importance in this case, since Mono’s two frontmen were to spend most of the concert either seated on stools or crouched low down on the floor.

The entirely instrumental music of Mono is a thrilling journey of epic proportions. Lonely, desolate threads of guitar pick their way through a barren landscape of ruin and emptiness, stalked by eldritch rumblings of bass and drums. Occasional interventions on keyboard and glockenspiel add to the looming sense of dread and unease, until the guitars and drums lock together and rise up in apocalyptic unison. Ratcheting up the tension in the merest of increments, the group transmute gaunt and skeletal melodies into red-hot cauldrons of burning intensity.

Clearly the leader of the group, Takaakira Goto is mostly responsible for those weeping Fender runs. When he’s not huddled over his instrument, his long dark hair entirely obscuring his face, he’s drawing patterns in the air or coaxing ever more funereal lamentations from the impressive range of effects pedals at his feet. Rhythm guitarist Hideki Suematsu takes a more circumspect approach, meting out clouds of riffage around Goto’s lacerating lead guitar. Wearing a fetching pair of red high-heeled shoes, bassist and keyboardist Tamaki Kunishi is a towering centre-stage presence, while Yasunori Takada augments his mighty drumming with occasional recourse to a large gong suspended behind his kit.

Although Mono clearly bear some sonic resemblance to Godspeed You! Black Emperor, their vast crescendoes and tidal waves of volume make them an electrifying proposition in their own right. The similarity doesn’t end there, though, since there’s an aura of mystique around the group that chimes with the dark progressions of their music. Over the course of the two-hour set, the group didn’t speak to or even acknowledge the audience once, nor did they respond to the fervent calls for an encore. Afterwards, though, they were all smiles, happily signing autographs and posing for photographs with the considerable knot of people who had stayed behind. 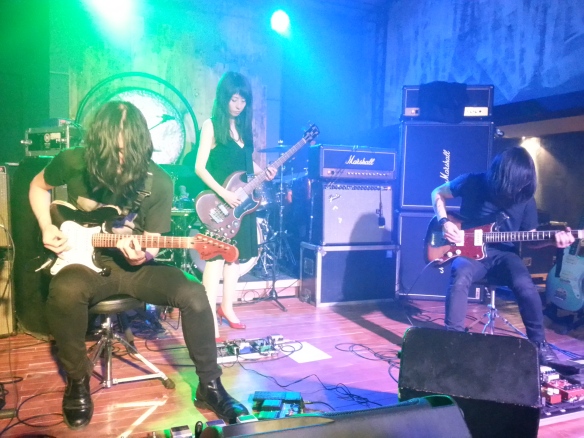