Anthony Braxton has proven to be a rather elusive character for me to pin down, physically as well as musically. He hasn’t played in Vienna since the first time I saw him, at Porgy & Bess in 2007, when I was admittedly not too familiar with his music. There have been occasional European concerts since then, but until last week I had only caught one of them, a 2008 show in Krakow which necessitated a 600-mile round trip. Braxton’s recent gig in the small Upper Austrian town of Ulrichsberg, near the border with the Czech Republic, wasn’t quite as arduous to get to, but reaching it had its own challenges, principally concerning when and when not to get off buses.

There being no trains to Ulrichsberg, it was the train as far as Linz and postbuses the rest of the way. The information I had gathered in advance suggested that the first bus would terminate at the intermediate town of Rohrbach and that a transfer to a second bus would be required from there to Ulrichsberg. This seemed to be confirmed by the sign on the front of the first bus, which quite clearly said ‘ROHRBACH’. In the event, though, the first bus continued all the way to Ulrichsberg, something I only realized in the nick of time as I was about to disembark from it at Rohrbach. On the way back to Linz, of course, the opposite happened. The bus going south from Ulrichsberg said ‘LINZ’ on the front, so of course I naturally assumed that it was going all the way to Linz, and accordingly settled down to enjoy the ride. Not a chance; the bus terminated at Rohrbach, and I had to scramble off it quickly in order to transfer to a second bus for the onward journey.

In my addled mind, I see a parallel between the state of Anthony Braxton’s music and the psychogeographical traps that were laid for me at Rohrbach bus station. You never know where you are with Braxton; he keeps you on your toes, refusing easy categorization and the certainty of a single musical direction. He plays in jazz clubs, records for jazz labels and gets reviewed by jazz critics, yet he doesn’t describe his music as jazz, preferring the term “creative music”. He cites John Coltrane and Eric Dolphy as key influences, but his graphic scores and mystical philosophy situate him in the post-serialist tradition of Stockhausen. Most of all, listening to Braxton is a perplexing experience, as liable to induce disorientation as it is exhilaration.

The beauty of the countryside seen from those postbuses, the modest nature of Ulrichsberg and the intimate and endearingly down-at-heel qualities of the Jazzatelier itself, all combined with my excitement at seeing Braxton again to make this one of the occasions of the year for me. This was a concert of Falling River Music, one of Braxton’s recently devised musical systems in which the scores consist of large, abstract paintings with minimal graphic notation. Joined by Mary Halvorson on guitar, Ingrid Laubrock on tenor sax and Taylor Ho Bynum on trumpet and cornet, Braxton played a single 80-minute set packed with incident, energy and sheer boundless inspiration.

The important thing about Falling River Music is that it’s not just a theoretical concept but a practical method. This much was clear from my position close to the stage, where I was able to witness the extent to which the quartet were concentrating on their scores throughout the performance, playing from them just as surely as if they had been conventionally notated scores. The bold, sweeping brushstrokes of the scores (painted by Braxton himself) gave the music a lyrical, flowing and spacious quality, in marked contrast to the more staccato attack that characterized Braxton’s earlier Ghost Trance Music system. Switching regularly between alto, soprano and sopranino saxophones, with even a couple of short blasts on the bass sax, Braxton presented a fantastic wealth of sonic detail with his unflinching, hyperactive playing.

No slouches themselves, the other three musicians made weighty contributions to the intense clarity that permeated this music. Mary Halvorson’s luminous, tensile guitar stalked the piece in crisp harmony with Ingrid Laubrock’s vigorous tenor and Taylor Ho Bynum’s exuberant brass. As well as playing from their scores, they took occasional cues from Braxton in the form of numbered hand signals – three fingers for trills, five for intervallic formings and so on – and were given the freedom to slip in extracts from certain earlier Braxton compositions. The room was uncomfortably hot (Braxton even removed his trademark black cardigan) but the heat generated by the performance was of a more telling kind. After more than 40 years of music making, Anthony Braxton is still a unique and compelling presence, his sense of adventure and restless creativity undimmed. 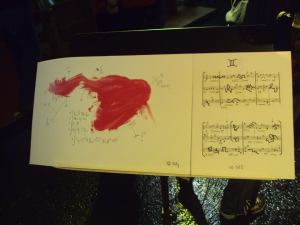